Mabrook to all of the winners, honorable mentions, and nominees for the Brass Crescent Awards. I would like to congratulate Suhaib Webb for Best Blog, Muslimah Media Watch for best female blog, and Marc Manley for honorable mention for Best Design and the many others . This year has been promising due to the high quality of articles produced by group blogs such as MuslimMatters, Muslimah Media Watch, and Suhaib Webb. A number of individual writers have contributed thoughtful pieces throughout this year. Many of them escaped notice during the Brass Crescent Awards. My hope is that this year we encourage a new crop of young writers with an eye for journalism, fresh perspectives, and sharp analytical lenses. 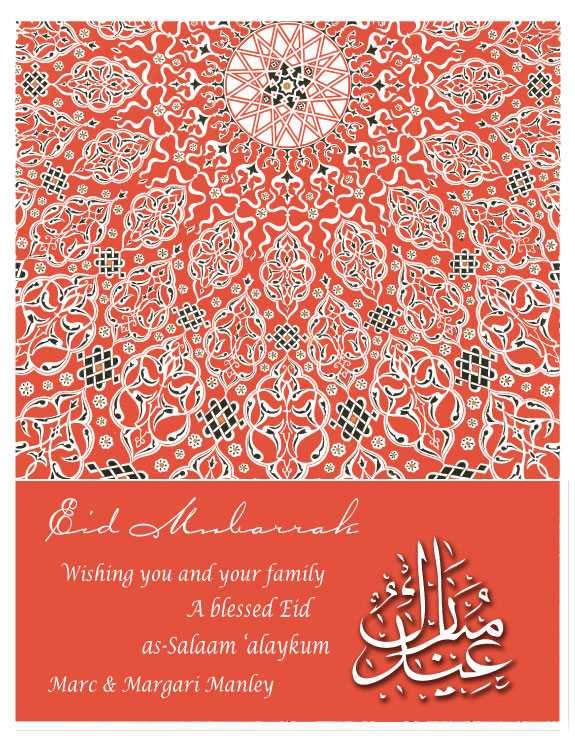 May Allah accept the hajj of the hajjis, including a few of my students and co-workers, and accept our fasts. This year I celebrated along with my husband at Masjid al-Aqsa, where I work. Imam Anas from Quba Institute gave the khutbah, a very thought provoking piece on bridging our ethnic divides in America. We had brunch with some very nice folks, an example of Imam Anas’s message. I started preparing for the ‘Eid feast on Wednesday, cooked all day yesterday and overnight. I have a few more dishes to make and we’ll have guests over. We’re having a traditional soul food ‘Eid: Turkey, stuffing, roast beef, mashed potatoes, peas, yams, macaroni and cheese, collard greens, black eyed peas, rice, salad. All we need is for you to bring the pie. One day I hope to post some of American dishes I’ve prepared during Ramadan and even some recipes from my ethnic specialities. I’ve spent a number of ‘Eids by myself or surrounded by unfamiliars. It is nice to be home and to have someone to share this special day.

…but I don’t have to address every attack against Islam.

The past few days, I’ve received some negative reactions from non-Muslims about my faith. Somehow, it causes a lot of anxiety for people who do not understand why I would be Muslim. People will ask me, “Why do Muslims do this? Why do Muslims do that?” I don’t feel that I have to answer for a billion people, just as most Christians don’t feel that they have to explain Nazism, colonialism, or slavery. I’m not a polemic or an apologists. I don’t think that Muslims have been perfect in history, but Muslims have not committed atrocities on the scale of let’s say the Holocaust or dropped nuclear bombs on cities.

I don’t really care if you don’t understand my personal relationship with the Creator. It is not my issue if you hate my faith and our Prophet Muhammad, that’s yours. I’m not oppressed, but actively engaged in community life. This blog is not a platform for anti-Muslim polemics. I’m not going to engage Islamaphobes on this blog or in emails. Simply, your vitriol will be deleted. I don’t spend time going on Islamaphobe websites wasting my time on polemics. As the famous Ayat in the Quran states: “I do not worship what you worship and you do not worship what I worship. To you be your religion and to me mine.” 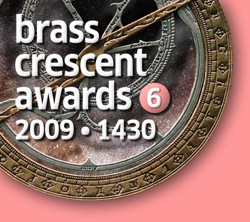 The 6th Annual Brass Crescent Awards are open for voting. There are some really impressive writers that are on the list. I was actually surprised to see my blog nominated, especially since I haven’t been posting much. But I am not surprised to see my husband’s blog nominated for Best Design and Best Writing. He has done some great work for the Philadelphia community and his writing, masha’Allah, reflects his intellectual and community endeavors. I think some of his finest work is on the Ma’rifah blog. This year is also bittersweet because we now have a category for best retired blog. There are some writers who I dearly miss, but I hope one day that their thoughts will find some place in history on a dusty book shelf somewhere. I say that because I am fond of bookshelves.
On another note, outside the major slide into fitnah and backbiting that we experienced last year, there has been some positive developments in the blogosphere. With sites such as MuslimMatters and Muslimah Media Watch, we have some great collaborative work. When you combine their resources with the likes of Suhaib Webb’s blog and numerous others, the future of blogistan looks pretty bright. It really humbles me to be included among these heavy hitters. I hope that one day I can rise to the occasion and someday prove worthy of such high consideration.

This is because Allah has never changed a favor which He has conferred upon a people until they change their own condition; and because Allah is Hearing, Knowing
Quran 8:53

Maybe it is a reflection of the times, but our community has become self destructive, in other words the Muslims, as a community, is its own worst oppressor. This is especially the case in Philly where there are only a few small pockets where a thinking Muslim can have some semblance of individuality. With so many Muslims, you’d think there would be more opportunities to develop some sense of fellowship. Philadelphia Muslims seem to undermine whatever community building and personal development and put in its place factionalism, polemics, and self-righteousness. Only a few communities offer a ray of light offering some hope that we can climb our way out of pathology. Even grassroots Muslim leaders begin to wonder if there is hope for our people. And when I mean people, I am talking about Black people. And by hope, I mean the transformative power of Islam in cleaning up people’s lives and offering them dignity.

Before I moved out here, a sister told me Philadelphia has some of the craziest Muslims. My husband recently saw a young man working at a Dunkin Donuts with a tattoo on his face, all over his arms, and even on his knuckles. Funny thing is, he had a very Muslim name. And we don’t mean the typical Arabic or Swahili names that Black folks picked up like Malik or Jamal. Naw, his name meant the perfection of faith. And there he was, all tatted up, molesting his co-worker, only to get a bit nervous when he saw my husband in his obviously Muslim attire.

Philly’s the only place where I’ve seen a hijab wearing Muslim smoke cigarettes in the day time during Ramadan. Maybe she wasn’t fasting at the time, but why would she still smoke in plain sight. This is the only city where I heard of three niqab wearing Muslim sisters jumping another woman in a Walmart parking lot in day light hours during Ramadan. It is probably the only place where similarly pious sisters will scrap in front of their children’s school and masjid, then return the next day bringing their non-Muslim family members to back them up in a fight.

I am saddened that there are others who try to discredit my husband by spreading rumors he’s shi’a because he once used the title “Imam” in front of Ali and prays with his arms down following the Maliki school. Philadelphia Muslims quibble about a whole lot, and they seem to have lost the forest for the trees. They will argue about ‘aqeedah, not being on the right minhaj, not following the right sheikh, but nobody is going to address sexual abuse, slander, and criminal activity in the community.

But I see rays of hope in my young students, as I read their journals and they write about their hopes, dreams and aspirations. Sometimes I am heart broken because the apathy that is so widespread in the Black community has also infected so many of them. I am hopeful when I see institutions like Quba Institute producing young Muslims who have Islamic literacy and are engaged with their society. Islam is not some cultural identity, but rather a vehicle for character building and a means to getting towards our ultimate goal, which is to meet our Lord.

I hope this next generation gets it right, or at least better than us. I know I’ve made many mistakes, fell off, and faltered a number of times. But once our youths step away from their X-bosses and take out their ear plugs, I know that they will have the vigor and the skill set to set this ship on its right course.