As grandma Sara’s memory fades, what remains are the stories she told us. My three other grandparents died by the time I was five and all I am left with are memories of the stories my mother told me about them. I was in graduate school when I gathered enough courage to ask grandma Sara what it was like when she was young in Jim Crow South. She recounted the fear she felt when encountering groups of white men on those country roads. She told me about her father, Carlos Hilton, the farmer who had the courage to stand up against white men who wanted to take what was his. “He didn’t take no mess,” she said proudly. He eventually migrated North because the threat of lynchings. Facing daily threats of violence and degradation, I wonder, how did my ancestors survive Jim Crow and slavery? What inner source of power gave them the fortitude to carry on? Reflecting on accounts of Bilal ibn Rabah’s life, I am finding my own strength in embracing struggle and in finding hope through unity.

There are times when I have to dig deep to find meaning in Black suffering, in the broken lives of those who were forgotten. With the barrage of headlines, from African migrants enslaved in Libya, genocide against the Rohingya, and exploitation of farm workers, it’s tempting to spiral down into a dark place. Earlier this week, I tweeted:

Whenever people tell me everything’s gonna be okay I remember slavery, Genocide and war.

As I thought about the forgotten names, I also began to think about how could I reclaim my own history. Recently, I began searching through online records to trace my family’s genealogy. My great great grandfather was six years old, my daughter’s age, when slavery was abolished. She is now learning how to read, something that would have been forbidden to many of my enslaved ancestors. Could he have imagined me teaching college courses, my writings being used in high school textbooks? Could he have imagined that his descendant would stand below Lincoln’s portrait Presidents reside? What type of future did my great great grandfather dare to imagine?

The archive doesn’t reveal the dreams of the enslaved, the freed men and women, the day laborers, the domestics, and the farmers who made up much of my family.  But my paternal grandmother shows up in the archive, as an entry on a 1940s census as a border whose occupation is a maid.  Another entry, my step grandfather is listed as  a chauffeur. I called my mother and got enough information to locate my maternal grandfather,  a 9-year-old boy living with his uncle Simon Grant in Pensacola, Florida.  The census lists my grandfather as “M” for mulatto and his uncle’s family as “B” for Black. Some would later say that my grandfather was Native American. Better that myth than carrying the shame of sexual violence. Could that have been why he was sent to live with his uncle? From Alabama, Georgia, and Virginia, they migrated North from their place of birth in search of opportunity and safety. What was the one dream that kept members of my family going?

I ask these questions knowing that no matter what the circumstances, every person experiences the full range of emotions. Even without the indignities of racial oppression, we all experience sadness, alienation, disconnection, and at times despair. Our world is broken and many of us have few paths to make a difference. But through storytelling, we are uplifted by heroic stories that illustrate our highest potential. My family’s exodus from the South echoes that Biblical tales of freedom. Yet a Black hero or heroine is hardly ever farmed as a universal character.

So, a Hollywood Celebration of an enslaved man of African descent who lived 1400 years ago seemed like such an unlikely event.  But it did happen this past Tuesday.  I sat in an audience watching the #BilalMovie with a mixture of actors, entertainment leaders, Los Angeles activists, and creatives. For Black American Muslims whose cultural identity is tied to enslavement, Bilal ibn Rabah takes on deep meaning. He is such a dear figure to my faith community in general. Stories of the Sahabi often cause me to weep. I was moved to see people of all faiths and backgrounds being touched by Bilal’s struggle against persecution. That event spoke to the power of storytelling, connecting people from diverse backgrounds. All the forces that brought us together in that moment, all the efforts that put things in motion and there we were. It was the power of one word, the encouragement of one person, that one gesture, that one story which moved us in a new direction.  Things put in motion long before Bilal ibn Rabah was born and would continue long after. Slavery, genocide, and war are destroying lives today. And there is something we can do to ease the suffering of the most vulnerable. Whenever I feel weak and broken and that I can’t bear the burden any more, I imagine the prayers, hopes, and aspirations of my ancestors.  I find my strength in moving towards that vision by my belief in one humanity, one earth, and one God. For me, that is the #PowerOfOne. 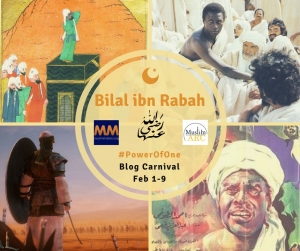 This Black History Month 2018 Muslim Anti-Racism Collaborative (MuslimARC) and Muslim Matters are collaborating to host a Blog Carnival on #ThePowerOfOne. Please join us to share your personal reflections and thoughts, articles, videos, and art on Bilal Ibn Rabah. What does the Power of One mean to you?