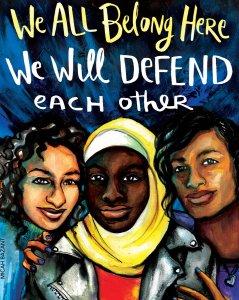 I penned a letter to the editor of Essence Magazine, but haven’t heard back. I thought I’d publish it here.

I’m a co-founding director of Muslim Anti-Racism Collaborative. You probably haven’t heard of my organization, as we’ve only been around for three years when we launched #BeingBlackAndMuslim. Muslim Americans are a diverse community, but media often erases the contributions of Black Muslim women. Unfortunately, the #Woke100 list failed to include a single Black Muslim woman.  For every 100 Black people in the United States, at least one is one Muslim. The erasure of Black Muslim women occurs in Black institutions that tend to be Christo-centric and in national Muslim organizations that tend to be Arab-centric. A recent Institute for Social Policy and Understanding (ISPU) study says that African Americans make up about 25% of the American Muslim population. While Muslim American institutions are embracing our contributions, our faith identity is not always embraced in Black communities. Black Muslim women are making important contributions to our communities and society at large. I’d love for Essence to feature  Black Muslim women, both those who are descendants of enslaved peoples and more recent immigrants from the Mother Land. These include Black Muslim women from countries President Donald Trump tried to ban, Sudan and Somalia. There are so many examples that I look up to, including Clara Muhammad, Betty Shabazz, Ilyasah Shabazz, Ameenah Matthews, Ilhan Omar, Aminah Wadud, Su’ad Abdul Khabeer,  and Ibtihaj Muhammad.  It is so important that Black media celebrates our diverse faith traditions and shares nuanced stories about Black women that are not featured in mainstream media. Starting with Black Muslim women, who face triple marginalization, would be a good place to start.

Copyright
Please do not copy and paste entire articles in other forums and emails. A short selection and link is more appropriate. If you would like for others to read the blog, please link back to my blog. I would like to know how did people discover my work. If you use a sentence or quote in my blog, please provide attribute the work to me.
Loading Comments...