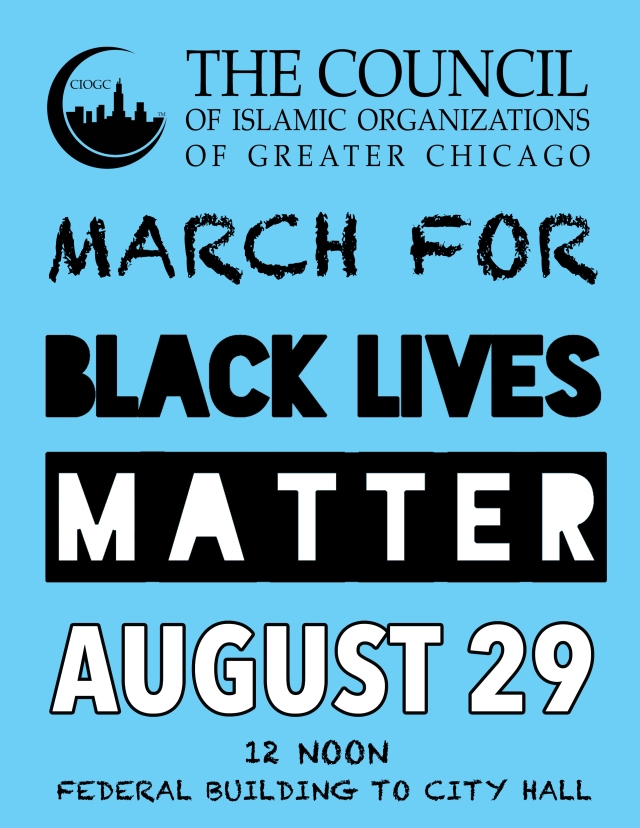 With the full support of The Council of Islamic Organizations of Greater Chicago (CIOGC), Muslims are joining thousands in a rally and  march from Chicago’s Federal Building to City Hall to call for an elected Civilian Accountability Council. Grassroots campaigns to address violence and criminalization of Black and Latino communities are significant in this movement. This is the city where our sister Ameenah Matthews  and other Interrupters have courageously stood between rival gangs. According to Bill Chambers, CIOGC is a federation of organizations that represent over 400,000 Muslim Americans in the Chicago area.  Activists have long been fighting to change police policies, from Stop and Frisk, police killings, and even torture. In the past eight years, 400 people have been shot by Chicago police and only one was ruled an unjustified shooting. Don Rose points out,  Dante Servin, who was only the second Chicago police officer to be indicted in 20 years, but even he was recently acquitted of manslaughter for shooting Rekia Boyd.   In the Homan Square police warehouse interrogation facility  200 suspects from 1972-1991 and Emanuel Rahm approved a reparations settlement for victims of torture. Anjum Ali explains, “I heard a WBEZ story about the Chicago review board, IPRA, made up of mostly law enforcement people, and how they almost never rule an officer-involved shooting to be unjustified.” Ali  pointed out the connections between Human Rights violations against Muslims and the war on terror and Chicago. He notes, “Det. Richard Zuley who honed his torturing skills in Chicago and was sent to be an interrogator at Guantanamo Bay. Ali highlights,“The Muslim community and others have been outraged by the techniques used in the Guantanamo Bay facility, but it’s happening right here.”

In the video, Imam Abdul Malik Mujahid  affirms, “Black Lives Matter” and states that the historic march aims to do two things:  Stand in solidarity with Black Lives Matter, and ask for city council to pass a law to establish civilian oversight of Chicago’s police. On the CGOIC website, “this march coincides with the #BlackLivesMatter movement and the teachings of the Prophet Muhammad (peace be upon him) who used coalition building as a major strategy in his efforts for peace.” The Muslim efforts are largely coordinated by Imam Abdul Malik Mujahid, Volunteer Chairman for Justice for All, an organization that “… has taken on the mandate of doing political advocacy for causes that do not get mainstream support.”

As of Saturday morning 201 have joined  Muslim Join August 29 March the facebook page.  Churches, mosques, temples, and labor unions are joining in the organized rally, which According to the facebook page, the Council of Islamic Organizations of Greater Chicago  is providing water for 10,000 people.

On the Facebook Event page  hosted by The Chicago Alliance Against Racist and Political Repression states “We are uniting our shared experience fighting for justice in order to bring about a systemic change. We are empowering the people to hold the police accountable for the crimes they commit, and to decide and control how they are policed” As of early Saturday,  1263 people signed up on the facebook page. Buses are schedule to pick up participants from ten mosques including  the Muslim Community Center (MCC). Muslim Education Center (MEC), Islamic Center of Wheaton (ICW), Islamic Community Center of Des Plaines, Islamic Foundation, Islamic Foundation North (IFN), MECCA Center, Mosque Foundation, Dar-us-Sunnah, and Masjid Al Farooq. The mass rally is utilizing the hashtags #ChiRisingAug29 , #StopPoliceCrimes, and #BlackLivesMatter

Copyright
Please do not copy and paste entire articles in other forums and emails. A short selection and link is more appropriate. If you would like for others to read the blog, please link back to my blog. I would like to know how did people discover my work. If you use a sentence or quote in my blog, please provide attribute the work to me.
Loading Comments...
%d bloggers like this: