One of the best experiences in graduate school is teaching and this quarter I have the opportunity to teach my own historical sources and methods course on Race and Slavery in Muslim societies. Here are some snippets from my course: 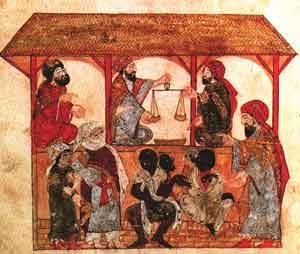 Slavery, Race, and Society in the Middle East and Islamic Africa from the 7th century to the 20th century

Why are there still reports of slavery in some Muslim majority countries? How does slavery and race overlap in Muslim societies? During the rapid expansion of Islam from the Arabian Peninsula to Asia, Africa, and parts of Europe, Islamic concepts of universal brotherhood at times united disparate ethnic groups and various social classes. Yet, the Muslim world experienced one of history’s most substantial slave revolts and numerous ethnic conflicts. This course broaches a number of questions involving slavery and community identity in the Middle East and sub-Saharan Africa.

COURSE DESCRIPTION
Students will have the opportunity to explore issues of slavery and ethnic-identity Muslim societies in the Middle East, as well as sub-Saharan Africa, through a close reading of primary sources. Students will analyze Islamic religious texts, epics, poetry, prose literature, Arab and European travel writings, slave narratives, polemics on slavery and race, inventory and manumission documents, colonial reports, and pictorial representations. As this is a comparative course covering a broad historical sweep, students will be required to compare and contrast periods and geographic regions. This course also allows students to examine the particularities of various Muslim societies keeping in mind universal Islamic principles. Throughout the quarter we will explore historiographical issues raised by studies of slavery and race in Middle Eastern and Muslim societies.

This is a thematic and comparative course examining several periods and locales. The course introduces Islamic principles of universal brotherhood and the Muslim community and examines how various Muslim societies dealt with social inequality, slavery, and ethnic boundaries. The chronological range stretches from the classical period of Islam (from the rise of Islam in the 7th century to the 10th century), African slavery including trans-Saharan slave trade until 1800 and Indian Ocean slave trade, trans-Atlantic slave trade, and the abolition of slavery in the Anglo-Egyptian Sudan during the early 20th century. The quarter concludes with an examination of slavery in the Muslim societies in 20th century.

In the course, we examine various types of sources to try to explore themes of race and slavery over time and through space. One of the challenges is that you will find that there is no clear coherent narrative of slavery. The issues play out different depending on the society and historical circumstances. This is why I picked the following thematic approach:

9/22 Introduction to the Course

9/24 Islamic Traditions on Race and Slavery

Slaves: Primary: The Qur’an and Hadith on slaves in Hunwick 2-7

Week 2. Transformation in Slavery from Pre-Islamic Arabia to the Early Muslim community

10/13 The Shuubiya: High culture and  Controversy between Arabs and Persians (10th and 11th century Iraq and Persia)

Week 6 Concubines and Royal Soldiers until the Early Modern Period

10/29 Inside the Harem: Concubines and Eunuchs

Outside Film Viewing : Prince Among Slaves, Preliminary Dates Week 11/5 or 11/6

11/12 African Muslims in the Americas

Week 9 Islamic Slavery and the West

11/19 Islamic Slavery and the European Lens

Week 10 Slavery in the 20th Century

Readings on Slavery Sudan and Mauritania

I have the privilege of a small class with a group of sharp and motivated students. My class is multi-cultural with students from various backgrounds and majors. As the texts get richer, they are contributing critical insight into the texts themselves. So far, we have examined the Qur’an, the hadith, the Prophet’s Last Sermon, one of the seven hanging verses written by ‘Antara, early biographical literature, al-Tabari’s account of the Zanj Salve revolt (one that he lived through), Ghazali’s text on the rights of slaves, al-Jahiz’s humorous essay on the “Glory of the Blacks,” and this quarter we have still more to come. Some of what we find in the text is jarring, at times it confirms our assumptions.

By the end of this course, I hope to write a scholarly article on teaching race and Islam. There are many challenges and problems in teaching slavery and race. There is no clear historical narrative linking all the case studies we are exploring. But what we do have in each case is the acceptance of slavery and inequality as a given. The course is not polemical, we often refrain from making judgments, at the same time we try to not overly historicize and overlook the brutality of human bondage. But by looking at the ways we can reconstruct the voices of the enslaved, understand how Muslim elites and literati thought about slavery and race, and explore the debates and contestations that centered around servitude and community identity, we can better understand these societies. Looking at slavery does not tell us everything about a particular society, but it provides an important view into the ways in which people saw themselves, the ways they asserted their power over their lives and/or over others, and the relationship that individuals had with power. Through this type of critical engagement my students will be better equipped to dialog about race and inequality both in Muslim majority societies and within Muslim minority communities in the West.

Charles Catchings lent his support by providing a rare edition of the al-Jahiz text. We spoke of doing some collaborative work to make the text more available, as well as many of the insights we’ve explored this quarter. I encourage you to be on the lookout for this upcoming project. In the meantime, I am working on a short reading list of primary and secondary sources for those who are interested. Please email me if you are interested, I’d love to hear your thoughts on these texts also.