In December 2005, I went to a talk with Cornell West and Zaid Shakir on the legacy of Malcolm X and Martin Luther King. I have to give it up to the two brothers, they rocked the house. Malcom and Martin differed on many issues, but both were gunned down, becoming martyrs for the liberation of Black Americans (and thereby opening up the doors for so many others including women, immigrants, and other minorities). Whenever I think about race relations in the Muslim community, I think to myself, “What would brother Malcolm say about this?” For example, when I watched this Hajj documentary and a Black South African was dissed really hard by his South Asian South African brethren, I wondered: “What if brother Malcolm’s experience on Hajj had been the same? Would he have become an orthodox Muslim? What if those South Asian coloreds dissed Malcolm? Would he have been agnostic?” Afterall, it was his experience on Hajj that opened his heart to accepting European, Arab, South Asian, and South-east AsianMuslims as brothers. For so many of us, Malcolm X has been so influential. I’m glad that folks stopped rockin the X gear, because nothing about El Hajj Malik Shabazz was trendy. 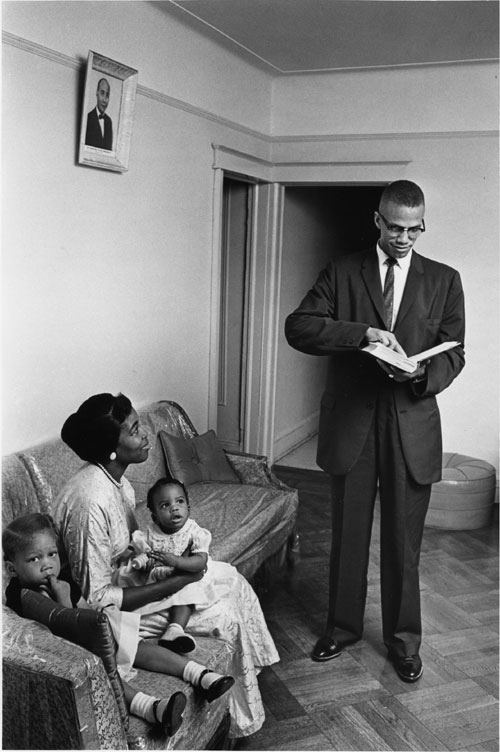 We often think about the men in the struggle, but how many of us consider the struggles of the women who stood beside them? When I first converted, I was always down for some liberation struggle. I was young, enthusiastic, and super idealistic. My friends used to call me Betty Shabazz. The tender scenes played out between Denzel Washington and Angela Bassett really moved me. If I imagined having a man as principled, dedicated, intelligent, and driven, then Betty Shabazz was the type of woman I wanted to be to support a Malcolm. Unfortunately, not too many brothers were on point like Malcolm. While I have so much respect for Malcolm X and Betty Shabazz, there is something really tragic about the Shabazz family.

I wonder how many of us know anything about her life? How many think about her struggles and the struggles of the Shabazz family. Here was the wife of one of Black America’s great heroes, the mother of his six daughters, Attallah, Qubilah, Ilyasah, Gamilah, and twins Malikah and Malaak. She went on to earn her PhD in education, was an educator and public speaker. She raised all six of those girls trying to instill in them Islamic values.

But I remember the downfall of Betty Shabazz. It was tied to revenge. I was devastated to hear her name smeared. There were accusations that she and her daughter, Qubilah, tried to hire a hitman to kill Louis Farakhan. Then there was the reconciliation between Farakhan and Betty Shabazz. Although Qubilah was never imprisoned she was ordered to undergoe drug treatment and counseling. Qubilah’s 12 year old son, Malcolm, went to live with Betty. On June 1, 1997 Malcolm lit a fire in her apartment. She died three weeks later on June 23, 1997. It is sad that her own grandson, Malcolm’s eponym was ultimately responsible.

Betty Shabazz is still my hero and a powerful example of what Black Muslim women should strive for: dignity, courage, and dedication. Her life and death reflects the struggle of so many Black women who have held it down to keep their families together and support the community.

Copyright
Please do not copy and paste entire articles in other forums and emails. A short selection and link is more appropriate. If you would like for others to read the blog, please link back to my blog. I would like to know how did people discover my work. If you use a sentence or quote in my blog, please provide attribute the work to me.
%d bloggers like this: