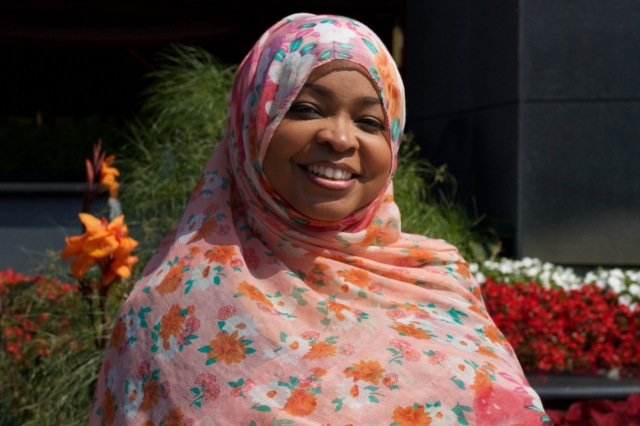 Margari Aziza Hill is co-founder and Programming  Director of Muslim Anti-Racism Collaborative (MuslimARC), assistant editor at AltM, and columnist at MuslimMatters. She is a Women’s Policy Institute-County fellow, joining the First for Women team on protecting women’s religious rights in the criminal justice system in LA County. She is also an adjunct professor, blogger, and freelance writer with articles published in Time, SISTERS, Islamic Monthly, Al Jazeera English, Muslimmatters, Virtual Mosque (formerly Suhaibwebb.com), and Spice Digest.   After converting to Islam in 1993, her life experiences as a Black American woman have informed her research and writing on Islam, education, race, and gender. She has nearly a decade of teaching experiences at all levels from elementary, secondary, college level, to adult education. She has worked in education at various capacities including as substitute teacher, instructor, curriculum design, school policy, teacher training, as well as teaching assistant and teaching fellow. She taught Writing and Literature at Al-Aqsa Islamic Academy, developed instructed an Art and Literacy class for Clara Muhammad Summer Camp, worked as a Lead Teacher and Curriculum Developer at United Muslim Masjid Summer Madrasa, and taught traditional and online college level Introduction to World Religions. She earned her bachelor’s degree in History from Santa Clara University in 2003 and master’s in History of the Middle East and Islamic Africa from Stanford University in 2006. Her research includes colonial surveillance in Northern Nigeria, anti-colonial resistance among West Africans in Sudan during the early 20th century, transformations in Islamic learning in Northern Nigeria, and race in North American Muslim communities. She has given talks and lectures in various universities and community centers throughout the country. Topics she has lectured on include:

For speaking inquiries, request a speaker at Muslim Anti-Racism Collaborative. Media inquiries and interviews, contact margari.hill@gmail.com. You can follow her on social media:

(Disclaimer: Views on this blog are entirely the author’s and not the official position of Muslim Anti-Raciam Collaborative)

One thought on “About Me”

Copyright
Please do not copy and paste entire articles in other forums and emails. A short selection and link is more appropriate. If you would like for others to read the blog, please link back to my blog. I would like to know how did people discover my work. If you use a sentence or quote in my blog, please provide attribute the work to me.
%d bloggers like this: